Beyond the Nest’s Review of Blackfriars' Little Women, The Musical | Kids Out and About San Antonio

Beyond the Nest’s Review of Blackfriars' Little Women, The Musical 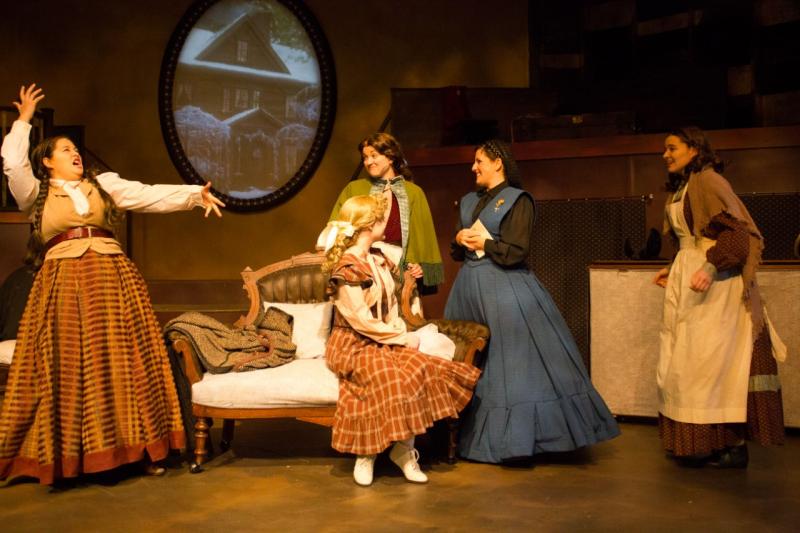 If you’re familiar with the beloved story of Little Women by Louisa May Alcott, you’ll be happy that this musical closely follows the book. In fact, the songs, with music written by Jason Howland and lyrics by Mandi Dickstein, offer us the opportunity to become better acquainted with Alcott’s charming characters.

This is the heartwarming story of Jo March, a wannabe novelist who rebels against 19th Century conventions. Jo’s three sisters, her mother and even her wealthy, cranky, disapproving Aunt March (Vicki Cassarett) are a source of strength and inspiration for Jo, who would rather travel and write adventure novels than follow custom and get married.

The musical is well-cast with actors who have glorious voices. From solo to full ensemble number, the music is rich and resplendent. Duets can sometimes be as challenging as solos, since each singer must simultaneously hold his or her own, while counterbalancing against or blending seamlessly with the other singer.  The sometimes amusing, often moving duets offer the perfect showcase for this accomplished cast.

Cassidy Thompson gives us a fun, bold, spunky Jo, who clearly conveys how frustrating life can be for an outlier in a world of conventionalists.  Mother, lovingly called Marmee (Ruth Bellavia), is a font of loving strength as she tries to keep her family together, giving each daughter the guidance she needs, while father is in the Civil War, then later, in hospital. Natalia Hulse is captivating as the gentle, sweet Beth who also has her humorous moments, particularly with Mr. Laurence (Steven Marsocci). The scene in which a reluctant Mr. Laurence sits at the piano to accompany Beth on the song “Off to Massachusetts” is pure fun. The four sisters, including petulant young Amy (Amy Vodacek) and calm, collected Meg (Rebecca M. Pfohl) play well off each other.

As the intellectually and culturally sophisticated, but socially naïve Professor Bhaer, Carl Del Buono turns in a fine performance as Jo’s love interest, and his German accent flows as smoothly when he speaks as when he raises his remarkable voice in song.

During the scenes in which Jo narrates her stories, the cast enacts alternate roles, bringing her fictional characters vividly to life on stage. These amusing vignettes make you feel as if you’ve stepped back in time to the golden age of silent films, replete with damsels in distress, villains, hags and heroes!

The musical runs a robust three hours, including a short intermission. It might have benefited from a bit of editing by those creating the score, but scene transitions were smooth and quick, and cast and director (Patricia Lewis Browne) kept the show engaging and moving at a good pace, so even the dozen or so youngsters in the audience stayed mesmerized.

Little Women is a timeless tale of love and family, that also encourages us to pursue our dreams, no matter what obstacles, or how long it takes. When Little Women was originally published in 1868, a reviewer from Eclectic Magazine called it "the very best of books to reach the hearts of the young of any age from six to sixty". The same can be said of this musical. It is a phenomenal feast of music, perfect for the holiday season!

Little Women can be seen onstage at Blackfriars Theatre, located at 795 East Main Street in Rochester, through December 31.  If you love musicals, do yourself a favor and go see this one.

Carol White Llewellyn is Editor of Beyond the Nest and an advocate for the Arts. She is also Producer, Host and Editor of a cable and online Arts program, Conversations with Creatives.