Review of "Presidential Pets" | Kids Out and About San Antonio 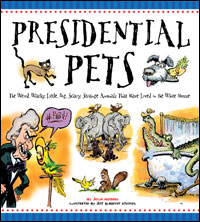 Have you ever wondered what George Washington’s dogs were like? Why Abraham Lincoln had a pet pig? The history behind President Martin Van Buren’s tiger cubs? Written in fun poetry and illustrated with brilliant, eye-popping pictures, Presidential Pets: The Weird, Wacky, Little, Big, Scary, Strange Animals That Have Lived in the White House, by Julia Moberg and Illustrated by Jeff Albrecht Studios, is just the book for you and your child!

You’ll marvel at the wacky photos, laugh at the silly poems, and discover with the cool facts about all the crazy pets that have resided our many Commander-In-Chiefs’ home. Each president gets a biography and a summation of accomplishments in office. Here is an example, from President Lincoln: 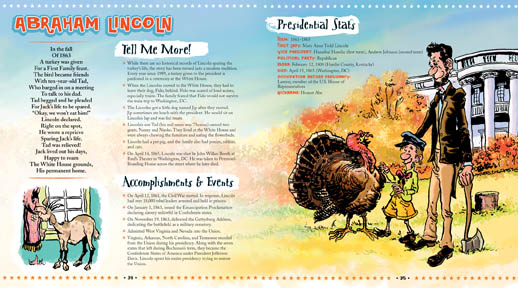 Presidential Pets is filled with stories that illustrate our past presidents’ personalities and lifestyles in a way that traditional history books can’t. I loved hearing about:

Presidential Pets taught me a bunch about not just the pets that all our past and present presidents have/had, but also about what these presidents were accomplishing in their busy time at the White House.

Presidential Pets is targeted at a range of ages. The youngest age for which I could see someone purchasing Presidential Pets is about 5 years old. Although young, these readers would at the very least benefit from the exciting illustrations on each page.

I would say that the best or target age range for Presidential Pets is between 8 and 12.

Any elementary age student would have fun with the silly pictures and adorable poems. Older students, on the other hand, would find an outlet in the fascinating mini-bios and bullets of facts.

Depending on the attention span and learning crave of a preteen reader, this book is certainly applicable! If the preteen is an older sibling, flipping the pages of Presidential Pets as a family would be both informative and fun in nature.

I believe that calling Presidential Pets a research book is really dependent on the type of research happening. If you need a simple, easily understandable timeline of all our American presidents’ time in office, then this book is perfect. And of course, if you’re writing about the pets that these presidents had: Look no further! Truthfully, however, most high school or older middle-school age students would probably be better suited to further in-depth history books.

This was a fun, cute read. I simply adored the illustrations and poems…and I’m sure if you read it, you’d agree!

Presidential Pets: The Weird, Wacky, Little, Big, Scary, Strange Animals That Have Lived in the White House, written by Julia Moberg and Illustrated by Jeff Albrecht Studios, was published by Charlesbridge Publishing in Spring, 2012. It can be found at your local book store or at Amazon.com, BarnesAndNoble.com, or other online retailers. It retails for $14.95. We found it as low as $10.17 new and $7.64 used.

Olivia Farrar is a 14-year-old home-schooled student from Pittsford, NY.